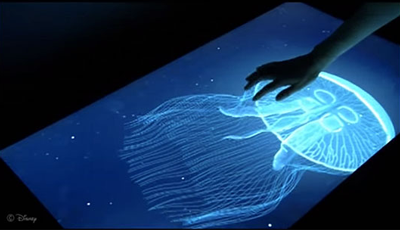 Touch technology is used all over the world and even in space. The abilities of touch technology is just being discovered while engineers and scientists study and research the unlimited possibilities. One study conducted at the University of California Berkeley researched individuals ability to navigate tactile technology.

Researchers discovered that individuals are better and more successful at navigating touch technology when they utilize both hands and use more than one of their fingers. In the study done at Smith-Kettlewell Eye Research Institute in San Francisco, CA, 14 blind adults and 14 blindfolded sighted adults were tested with challenges on a tactile map on an iPad.

For decades, scientists have studied how receptors on the fingertips relay information to the brain. Now, researchers at Disney and other media companies are implementing more tactile interfaces, which use vibrations, and electrostatic or magnetic feedback for users to find their way around, or experience how something feels. 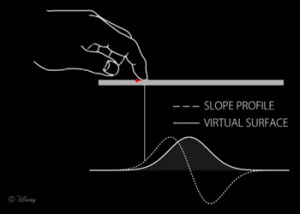 New tactile technology can enhance various spacial information of an image by the user. The potential for this technology could benefit many industry’s an jobs, but also could lead to a huge benefit for visually impaired or disabled users.

The technology at the Disney Research office creates 3D images on a touch surface with the ability for users to feel the texture and outlines of various objects. The algorithm used creates “ridges, texture and bumps’ on an image by mapping frictional forces between the screen and the slope of the desired virtual surface (the image being felt by user.) The image creates a realistic tactile sensation with electronic pulses to create the texture. For a better understanding of the tactile rendering on screens, watch the video below.

”Most sighted people will explore these types of displays with a single finger. But our research shows that this is a bad decision. No matter what the task, people perform better using multiple fingers and hands,” said Valerie Morash, a doctoral student in psychology at UC Berkeley. Both groups of participants performed better when using both hands and several fingers, but the visually impaired were 50 percent faster at completing the tasks and even faster when they utilized both sets of fingers.

Touch technology is used in a wide variety of high-risk industries like robotics for military, space discovery and surgical procedures. By analyzing what makes the visually impaired more successful, they can start to integrate the technology for supporting the use of multiple fingers.