Tim Howard: An American Hero Who Hasn’t Always Had it Easy 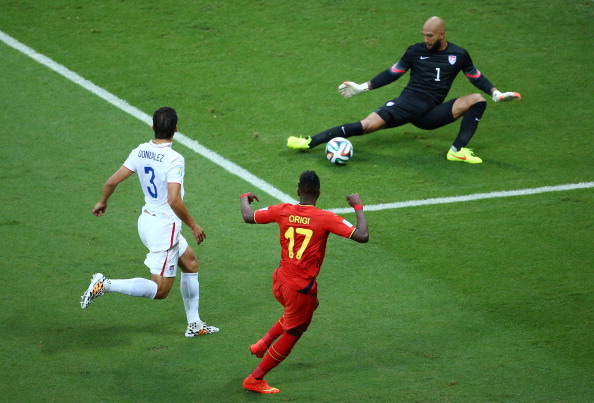 On Tuesday, July 1st Tim Howard set a FIFA World Cup record: 16 saves in a single match as a goal keeper, the most of any goal keeper in the 84 World Cups to date. He floated, dove, flipped and kicked, making every save look like it was effortless. Howard showed the world that he is the best of the best, a top-of-the-line athlete in the world’s most popular sport. But there is a lesser known characteristic about Howard besides his athletic ability, he has Tourettes Syndrome.

Watching the Men’s Soccer team play on a world stage you would never notice that Howard has any disability. Howard says its about managing emotion, “I’ve never counted [how many tics I have in a game],” he said in a 2013 interview with Spiegel Online. “It always occurs more when I am particularly nervous.

When the ball is far away, he says he indulges his twitches. “I don’t suppress it,” he told the German publication. But when an opposing striker approaches and readies an attack — which happened over and again on Tuesday — his muscles miraculously calm. Being able to concentrate and focus his energy has been a gift that only soccer can bring him.

Around the age of 10, Howard started having facial tics and they would worsen in unfamiliar situations that made him anxious. He started displaying habits of obsessive-compulsive behaviors, counting objects, aligning them, touching cracks in a brick wall, “a certain pattern had to be followed, an exact routine,” mother Esther Howard told the New Yorker in one interview. “He had to put his clothes on the same way every day.”

Howard had a difficult time growing up, trying to get a grip on managing his tics with his body without a new one appearing. But early on, Howard found an outlet, soccer. He could focus his thoughts and utilize his disability’s energy toward the game. His career only blossomed from there, playing in the United States for the MetroStars in New York. Howard’s skill eventually lead to him getting picked up by Manchester United in the U.K. in 2003.

But the British press was not so keen to report on his success and world class reputation. Headlines read, “United want American with brain disorder,” another “Manchester United trying to sign disabled goalkeeper.” Dutch newspapers called him “handicapped”and slews of inappropriate names.

Eventually, Howard switched teams with more supportive fans and has helped redefined the way the U.S. soccer team plays today. the 35 year old star has a record setting 8 starts in the goal in the World Cup for the Men’s team and played the game of his life on Tuesday.

While the U.S. Men’s team has come to the end of the road for the 2014 world cup, Howard will be almost 40 when the next World Cup rolls around in 2018. But he says he’s not going anywhere. He’s most proud that he didn’t “allow myself to be restricted by Tourette’s syndrome.”

And today, “one of the biggest things I can do [for Tourette’s awareness] is be in the public eye,” Howard said in an interview with Neurology Now. “I’m on television, ticcing and twitching. I think that’s kind of cool.”