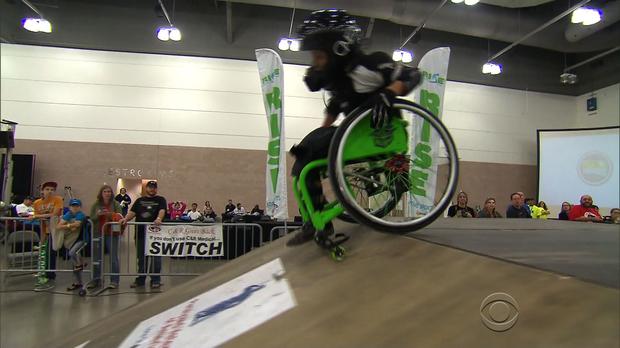 Aaron Fotheringham was born with spina bifida, a spinal cord defect that left him unable to walk or use his legs. From that point on, Aaron never let his disability define him or slow him down. Fotheringham is known by thousands around the world as an extreme athlete, able to defy gravity in his wheelchair.

“You always hear, ‘Ah, he’s in a wheelchair… oh, he’s confined to his wheelchair,'” says Fotheringham. “I’m always like, I’m not confined, you know. I’m riding it like a skateboard or a bike. And I love it.” Fotheringham used the doubts of many to fuel his passion, by eight years old he was learning tricks at the skate park. By 2010 he had successfully completed the first wheelchair double back-flip.

Breaking records and achieving new levels of extreme are what Fotheringham loves best. He recently attempted California’s “Mega Ramp” which houses up to a 70 ft. gap jump into a 27 ft. tall quarter pipe. Fotheringham didn’t land the jump, but doesnt let that keep him down for long.”You’re in the air for so long and for me that’s what it’s all about. I’m just getting my frequent flier miles and having fun,” Fotheringham said.

Fotheringham is also a star performer in Nitro Circus, an extreme sports show that tours the country, has a TV show and releases movies. Aaron soars, flips and sparks at the shows wowing the thousands who come out.

But its not just the attendees of the Nitro Circus tour that Aaron wow’s, its the events like one held recently outside of Dallas that connects Fotheringham with children in wheelchairs. Aaron teamed up with volunteers at a local indoor skate facility to encourage children to push wheelchair sports to the next limit.

“There’s just so much happiness floating around,” Fotheringham said. “So it’s cool seeing these kids how much they can accomplish and breaking all the stereotypes. It’s rad.”

Fotheringham won’t have to push limits to new highs alone for much longer, but for the time being, Aaron will have to find the next big trick to take on.