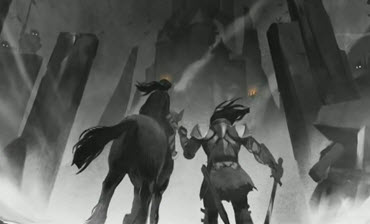 Video games are for everyone now, the concept of accessible video game design is sweeping the industry. While it may seem strange to create and design a video game that is lead through audible noise rather than visually stimulating through videos, designers are taking the challenge to make the games more accessible.

Binural technology is a  sound production technique that mimics natural hearing ques created by our ears. Typically for recording, two microphones are used to create a “3D” sound effect to give a full dimensional recording. Each scene in the game is recorded with a dummy that is retrofitted with condenser microphones that mimic the way our ears hear sound.

Through a crowdfunding campaign, a team of developers in France at Dowino Studios was able to raise over $50,000 USD to turn their demo into a functioning prototype. The game, Blind Legend, forces players to rely on their aural senses to navigate through levels. The game follows the story of a knight who has lost his eyesight and journeys through a forest to free his wife from her kidnappers.

Players use a touch screen to move the feet of the character and use swiping motions to swing the characters sword. Throughout all of the game, the screen remains dark. Sounds of nature like rivers, birds and wind are heard throughout the game so the player can associate their surroundings.

Through efforts to make gaming available to individuals of all abilities, the video game industry becomes more inclusive. While a majority of popular video games have yet to make a move towards accessibility, innovators at Dowino Studios have big plans to take Blind Legend international, planning to launch free on iTunes next year.