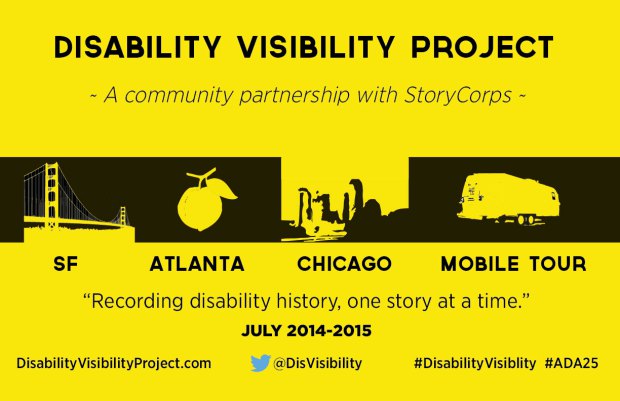 SAN FRANCISCO, June 16, 2014—A community partnership with StoryCorps, the Disability Visibility Project is launching a year-long campaign to encourage Americans with disabilities to record their stories at three StoryCorps locations: SF Bay Area, Chicago and Atlanta (and their mobile tour) from July 2014-2015. The Disability Visibility Project aims to record and preserve disability history by creating an archive that will be included in the American Folklife Center at the Library of Congress celebrating the upcoming the 25th anniversary of the Americans with Disabilities Act (ADA).

“The ADA was a landmark civil rights law that prohibited discrimination based on disability. In the year leading up to the 25th anniversary, we are taking this opportunity to remember and reflect as a community on the tremendous changes we’ve experienced so far,” says Alice Wong, Project Coordinator. “The history of people with disabilities rarely makes it in textbooks so our project’s slogan is simple: ‘Recording disability history, one story at a time.’”

For more information on how to participate in the Disability Visibility Project, go to: http://disabilityvisibilityproject.com/2014/06/07/disability-visibility-project-a-community-partnership-with-storycorps/