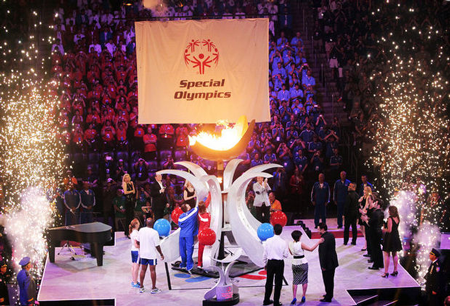 Over 18,000 people crowded into the Prudential Center in Newark, NJ on Sunday, June 13th to watch the opening ceremonies for the 2014 Special Olympics USA Games. Over 3,500 athletes from around the nation watched excitedly as the Flame of Hope was lit, officially starting the upcoming competitions.

The opening ceremonies included special guest such as Jane Lynch, Governor Chris Christie and emcee’s Brooklyn Decker and Michael Carter-Williams, among many. Competitions will run through June 14th to June 21th, will take place at multiple locations including Princeton University, Rider University and The College of New Jersey.

There are 16 events that athletes will be competing in from around the country including baseball, flag football, tennis and soccer. All of the 3,500 competing athletes have their eyes set on the final prize, an Olympic Medal. Some athletes have been waiting over a decade to be selected to compete for their state, like Steven Kryspin. Kryspin, 27, is one of six athletes competing for New Jersey’s power lifting team. this is the first time he will participate in the national games, which are held once every four years. “I wanted to be picked for the longest time,” he says in an eager voice.

Kryspin and his teammates have been practicing for several hours every day, encouraging each other do do their best. “I like to encourage people to do better. It’s always good to give people confidence,” says Kryspin. That’s exactly what power-lifting does for Steven, he says. “It gives me a lot of courage.”

Not only are the athletes inspiring each other, but they are inspiring all of the 70,000+ spectators that are expected during the week. “Your pursuit of personal bests is inspiring to all of us,” said T.J. Nelligan, chairman and CEO of the 2014 Special Olympics USA Games. The Hoboken resident, whose son, Sean, will compete in bocce, encouraged others “to view our children as we do — strong, accomplished individuals who have the power to change the world, one perception at a time.”